Section One: Notes on the Readings

(Photo by Roberto Nickson on Unsplash) 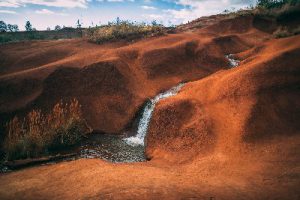 Reading the story of Moses drawing water from a rock, a preacher can draw upon at least two environmental angles.

First, the main thrust of this passage is the Israelites demanding Moses provide them water to drink, angering Moses since they did not simply trust that God would provide. This reminds us of two things: One, out of nature, God has provided everything we need, including precious water. This is cause to rejoice, as well as to take care of the earth. Two, Moses’ frustration and the name he gives the place – Massah and Meribah, to reflect that the Israelites “tested the Lord” – reminds us that God will provide, and we do not need to ask for more than that. When we quarrel and test the Lord, living beyond our limits, we take too much from nature, and begin the cycles of ecological devastation and deadly anthropogenic climate change.

Second, the Israelites have been travelling through the “Wilderness of Sin.” A question worth asking is, why does society often give a negative connotation to the word “wilderness”? Note that this is not named for “sin” as in sinful behavior, but for the Mesopotamian moon god Sin. Nevertheless, the Israelites are “lost” in the wilderness – whereas today, we can celebrate natural wilderness areas as pristine natural areas left as God made them. The idea that the ancient Egyptians would name a wilderness for a revered deity, reminding us that even the earth and the moon are interconnected, is a chance to reexamine our own relationship with wilderness and nature.

Even in the depths of our own mourning, grief, and despair – including the despair that comes from suffering the consequences of ecological devastation – there is always reason to make a joyful noise to the Lord. Finding light in the darkness does not entirely extinguish the darkness, and no pastor should ever tell someone to ignore their natural feelings, but the light does help make the darkness bearable. The only way we can find strength to tackle the climate crisis without becoming overwhelmed is to also find joy in the Lord.

The psalmist even reminds us where we can find some of that joy: By reminding ourselves who it is that creating the mountains, the sea, and the dry land that we are fighting to defend.

Paul’s reminder that “suffering produces endurance” pairs well with the Psalm’s ability to help us find joy amidst mourning. Paul’s point that suffering can be useful does not mean we should intentionally seek out suffering — this is no justification for pollution or fossil-fuel abuse — but it can remind us to use the suffering that we do experience as a source of strength and inspiration to help us in our fight against climate change.

Paul also tells us that Christ died for us even “while we still were sinners.” We do not need to feel guilty for our past environmental sins – for the species we have driven to extinction; for the bleaching of the coral reefs and the melting of northern permafrost; or for the communities who have lost their homes to larger hurricanes, hotter fires, or rising seas. God loves us despite these sins – but out of that freely given love and grace comes responsibility. Paul says we are now reconciled to Christ, and if we are to stay reconciled to the incarnate Word that dwelt among us on the earth, then we must care for the earth that received that blessing.

Reading about Jesus’s visit with the woman at the well, one could choose to focus on the importance of water, a vital resource from nature that Christ uses as the basis for his spiritual metaphors, or on his relationship with the Samaritan woman.

This woman is very likely an outcast in her society. First, she is a woman in a society that does not see men and women as equal. Second, she has had five husbands, which would likely cause her neighbors to ask questions. Did she kill them? Did they leave her because she was unfaithful? Third, she is still single, and a single woman should not cavort with men in public. Fourth, she is a Samaritan. That is of course not a problem in a Samaritan village, but Judeans (like Jesus) looked down on and discriminated against Samaritans.

Yet despite all of this, the woman was the very first person who Jesus went to when he arrived in her village – and did so at a public well, for all to see. This reminds us that it is the poor, marginalized, and outcast who Christ calls us to care for and love first – the very populations most affected by climate change and population. Indigenous peoples in South America are losing their Amazonian homes while their North American cousins resist the construction of new fossil-fuel infrastructure on ancestral homes; toxic waste sites are most often placed in poor and minority neighborhoods; and low-income communities are the least prepared to handle the financial impact of relocation, disease, and resource scarcity.

There are at least four ways to draw on these lectionary passages for a sermon that includes climate change, ecology, or nature.

The first option is to draw on Psalm 95 and the readings from Exodus and Romans to discuss the need to celebrate and enjoy God’s creation, even while we mourn the devastation occurring to it. Such celebration can ground us in our faith in Christ, and give us strength for the environmental work that faces us.

The second option is to focus on the Gospel of John, recognizing the ways in which the woman at the well was likely marginalized and outcast in her society – yet was also the very first person in her village to whom Jesus spoke. By that same token, we remember today that climate change and ecological devastation harm the marginalized and outcast among us the most.

Thirdly, one could point out that International Women’s Day was earlier this month, on March 8. Jesus’ association with the woman at the well shows us that there is no room for gender inequality in God’s kingdom – yet a new report from the Catholic bishops of Ireland finds that “disasters resulting from climate change are estimated to kill 14 times more women and girls than men and boys.” Thus, standing up for climate change is a form of fighting for women’s health and equality, just as fighting for women’s rights can help protect the environment.

Finally, one can cite water’s role in Exodus, Psalm 95, and the Gospel to preach on the importance of water – as a gift from God, and as a threatened resource that requires our attention today. Water is not only the most central resource to life, but it is also central to our faith, playing a key role in both baptism and the Eucharist. Yet under anthropogenic climate change, seas are rising and forcing South Pacific communities to relocate, the ocean is becoming more acidic leading to mass extinction of God’s creatures, and increased conflict and warfare due to drought and water security is becoming ever more likely. How can we honor God while simultaneously destroying the seas that the psalmist reminds us belong to God?