The most popular Christmas carol of all time, “Silent Night”, turns 200 on Christmas Eve. 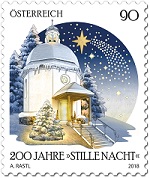 What happened to the “other” three verses of this Christmas classic?

It´s not only the most popular Christmas carol in its home country of Austria and its native Europe, but throughout the world: “Silent Night, Holy Night”, which was sung for the first time on Christmas Eve, 1818 – 200 years ago this year. Since its inception, this popular carol has been translated into some 300 languages. Today, the Christmas classic is sung from the Isle of Skye, known there as “Oidhche shàmhach”, across the Brazilian rain forest, where “Akamot met, Akamot met” is sung under a vast, starry sky, to the frosty Artic climes, where the Inuit join together in singing “Jutdlime Kimsugtut”.

“Silent Night” owes its popularity not only to the heart-warming melody composed by Franz Gruber, but also to the poetic text penned by Joseph Mohr (1792-1848). It was only because he had witnessed first-hand so much conflict and cold, scarcity and darkness that Mohr was able to respond to the deep peace offered at Christmas: “all is calm, all is bright.”

While all beginnings are difficult, Joseph Mohr had a particularly rough start in life. Born to a single mother in Catholic Austria in the late 18th century, his first years were spent in dark and damp quarters. The region in which he lived still bore the scars of the Napoleonic Wars and many of the people there struggled to make ends meet.

Nevertheless, Mohr went on to become a parish priest, working untiringly for the poor and sick in the villages where he served. The “priest of the poor” developed a network of providing for the “least of these” and fought against the cruelty of the social welfare system of the time which forced old and poor people to travel continuously from farm to farm. In addition, Mohr established a fund to enable the children of poor families to attend school.

Legend has it that the young priest approached his friend Franz Gruber on the afternoon of December 24th, asking the church musician to create a melody for the Christmas poem he had written. Just hours later during the Midnight Mass, Joseph Mohr reached for his guitar and presented a never-to-be-forgotten gift to his congregation in the village of Oberndorf, the Christmas carol “Stille Nacht, heilige Nacht.” The song originally contained six verses; unfortunately, only three are generally sung today. Ironically, it is the other three verses which, though somewhat archaic to modern ears, lend depth and vision to the carol.

The “missing” verses reflect a deep longing for peace on all levels, as well as describe the heart of Christmas: God comes in Christ to redeem the broken road we travel and to love and show all of the peoples of the world the way home, in time and eternity – a somewhat radical stance some 200 years ago in rural Austria. The fourth verse ends with an inclusive view of God´s expansive, unconditional love for all: “…and as brother gently embraced / Jesus, all people on earth!”. “Silent Night” was composed as a wish for peace and goodwill for all of God´s people, overcoming fears of every kind and walls of every making. No less in 2018 as in 1818. One of the other relatively unknown verses carries God´s “promise of care and redemption for the whole world” (v 5).

Though sickness and poverty were his contant companions and, from a human standpoint, he had every reason to despair, Joseph Mohr discovered a peace which the world could neither give nor take away, and a light brighter than a thousand suns. In the midst of a world sometimes appearing out of control, Mohr discovered that the center holds: “All is calm, all is bright“, and the final word is peace, “heavenly peace.” A vital faith enabled him to grasp the fact that he was never alone, not for a single moment, and that all things work together for good. What is the source of such hope? Who enables us able to endure and finally prevail? “Christ, the Savior, is born.”