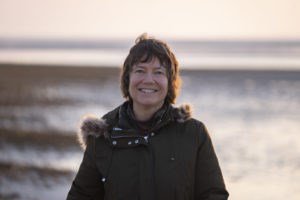 An Episcopal priest, author, retreat leader, and climate activist, Margaret Bullitt-Jonas serves as Missioner for Creation Care for both the Episcopal Diocese of Western Massachusetts and the Southern New England Conference, United Church of Christ. She seeks to inspire and support a wave of religious activism to address the climate crisis, deepen reverence for God’s creation, and create a more just and sustainable society. Her latest book is Rooted and Rising: Voices of Courage in a Time of Climate Crisis (2019), co-edited with Leah Schade. She maintains a Website, RevivingCreation.org. (To contact Margaret, email: mbj [at] revivingcreation.org).

After graduating from Stanford University (B.A. with honors in Russian literature) and Harvard University (Ph.D. in comparative literature), Margaret turned her life in a new direction: she entered seminary, earned the M.Div. from Episcopal Divinity School, and was ordained in the Episcopal Church. Her first book, the memoir Holy Hunger: A Woman’s Journey from Food Addiction to Spiritual Fulfillment (Vintage, 2000), describes how, during her years at Harvard, she overcame her food addiction and found her way to God.

Margaret was ordained in June 1988, just as mainstream newspapers began to report on global warming. Shortly after the Exxon Valdez oil spill in Alaska on Good Friday, 1989, she delivered the first sermon she’d ever preached – or heard – on the urgent need for eco-conversion, calling for Christians to place care for the Earth at the center of their moral and spiritual concern. Making peace with her body led to a wider concern for the “body” of the Earth; recovery from personal addiction led to engagement in the great work of our time: transforming a society addicted to consumerism, endless growth, and fossil fuels. Margaret believes that the root of the struggle is spiritual.