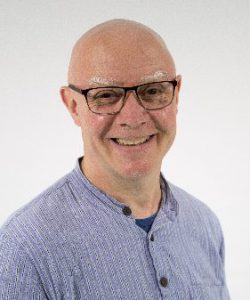 Revd Dr Dave Bookless is a CMS Mission Partner serving as Director of Theology for A Rocha International. A Rocha helps care for God’s creation in more than 20 countries around the world. He is also Priest-in-Charge of St Mary’s Norwood Greenof in multiracial Southall, West London, where he co-leads a monthly ‘Outside Church’ seeking to bring together God’s World and God’s Word. As part of his A Rocha role he is a Lausanne Catalyst for Creation Care and co-leads the global Lausanne / World Evangelical Creation Care Network (LWCCN) which has run 10 regional conferences with 1000+ delegates from 130 countries. Dave speaks around the world to conferences, colleges and churches, has a PhD from Cambridge University on biblical theology and biodiversity conservation, and has contributed to many books and articles. One of his books, Planetwise (IVP, 2008) has been translated into Chinese, Dutch, French, German and Spanish. Born and raised in India, Dave has a love for Indian food, Indian culture and Indian Christianity. Dave is also a qualified bird-ringer and loves birding, islands, running and mountains.

Dave and his wife Anne have lived in urban, multicultural Southall, London, since 1991. It is one of the most densely overpopulated urban areas in the UK, and the majority of residents originate from South Asia with increasing numbers from Somalia. It is religiously diverse with large Sikh, Muslim and Hindu communities and a diverse Christian population from many backgrounds. Issues include air pollution, dumping of waste, lack of access to green space and poor health, as well as trauma for those from war-torn and refugee backgrounds. The challenge of making global environmental issues connect with people focused either on economic survival or on ‘progress’ and prosperity, and of helping people put down psychological and ecological roots in a new ‘home’ are key, and Dave and Anne have been involved with others in A Rocha projects including community food-growing, environmental education, and local community-based interfaith environmental activism.