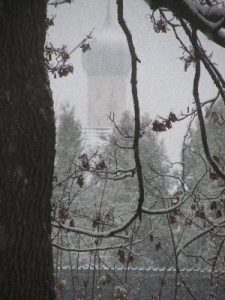 There seems to be a human tendency to start things at the wrong end. David, the king, and Nathan, the prophet seem to agree: a house needs to be built for God. And the reference to valuable building materials (“cedar”) leaves no doubt: if the house of the earthly king is most splendid, the one to be built for God should be – equally if not more so – a display of splendor, wealth and luxury.

Think of the absurdity of this plan! Not only the notion of the creature trying to impress the creator – an attempt that is always doomed to failure; but even more so, the constant attempt of projecting our own human needs and desires onto the divine being. When trying to justify unnecessary luxury, surely it helps to know, that your God lives in a house of cedar, too…

All this, the Lord in his nocturnal speech to Natan, turns around: “did I ever speak a word”, he asks, about needing a proper house (or even a most splendid and luxurious one)? And following this rhetorical question, the Lord starts putting things right, by starting with what really matters: his relationship to the people of God in all it’s various aspects. Only when all that is covered, the Lord turns back to the original theme, namely building a house; but interestingly this is now no longer something, any human (let alone the king) is supposed to do for him – it is the other way around, God is the one, who will build the place of dwelling for his people! When will they ever learn?

What a wonderful celebration of faithfulness a s the basic mode of operation between the Lord and his people (verses 1, 2, 19, 24). Always a reason to rejoice!

God, the source of mystery and the source of revelation: not described in stoic terms of philosophical and theological discourse, but through words of praise, bursting forth. Short and sweet – and powerful.

If, in Christian thought throughout the centuries, something like a cult of virginity exists, arguably this text could be seen as a potential source thereof. “How can this be, since I am a virgin?” Mary retorts to the announcement of the angel, and that, it seems, says it all. Why is Luke so keen on bringing this across? Where Matthew makes reference to a – potentially misunderstood (and lost in translation) – word from the prophetic writings of the First Testament (Mt 1:22, 23), Luke does not. He merely states virginity as a given.

We moderns may be ill disposed to appreciate what he is doing: he makes the Mother of God untouched and untouchable. He speaks from the perspective of an age, where by virtue of being a virgin you were virtuous. He speaks to an audience that appreciates the value (or even merit?) of this virgin state.

Sometimes I wish, we had not, in our modern age, so utterly forgotten about the state of being untouched. “So what?”, we think, and move on; or even, “Poor thing, has got no experience”. Don’t get me wrong: surely it is good to have moved beyond a glorification of sheer virginity, which almost by necessity, it seems, will imply that something is bad or or dirty or wrong with sex and with sexual experience. If being virgin is the ideal, then by definition, being a sexually experienced (and hopefully fulfilled) human being, is not.

No, that is certainly not what I am missing. But maybe it is our lack of shame, a state of mind that our parents or at least our grand-parents still knew, which would make us cringe at the constant raping of our mother earth by – ourselves. Carrying her to market and prostituting her, proud of all the commodities we have been able to rip from her bosom seems to be the live-blood of our greed-driven live-style of consumption and exploitation. The untouched and the untouchable we spurn or even laugh at.

Am I too harsh in the words I am finding for our hyper-capitalist way of life? Maybe. But maybe gazing upon the Virgin Mary, Mother of our Lord will somehow help to fix the screwed optics of a modern – even with respect to the way we see our mother planet earth in her defilement and shame. 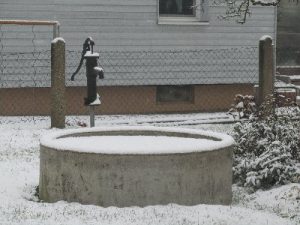 In the first week of Advent, punctually with the beginning of the month of December, it snowed. In the morning a white cloth had covered our garden and out of a greyish sky the flakes continued to fall, like a silent background melody,

“…frosty winds made moan
Earth stood hard as iron, water like a stone
Snow had fallen, snow on snow, snow on snow …

I wanted to go outside, take some pictures of an enchanted and transformed landscape – but I hesitated to plant my footsteps into the untouched cover of fresh snow. Do you know that feeling? There is something about that mystic moment of an untouched cover of snow, which will, irreversibly go away, once I step out there. It almost hurts, maybe like loosing some virginity.

Mind you, humans always leave their footprint behind, wherever they live, whatever they do. For good reason our age has sometimes been dubbed the Anthropocene. But never do we quite notice our own, intrusive nature quite as much as on a day, where a virgin layer of snow is slowly but surely trampled down.

Eventually I had to get out, take the shovel and clear the driveway. After all, I didn’t want anyone to slip and get hurt, I didn’t want to slip or get stuck with the car. But imagine, for a short moment, a world, where we could just leave things as they are, untouched and in their virgin state. If it ever snowed in the garden of Eden, maybe you would be able to walk there without leaving footprints?

But we, as those who live outside the gates of Eden so often do not have the luxury to stay (or leave things) in the virgin state of the untouched and the untouchable.

“How can this be, since I am a virgin?”  we hear the young girl Mary say in our Gospel reading for this fourth Sunday of Advent. We can sense, this is important to her and not something she wants to let go. But really, can she have it both ways? To “conceive […] the Son of the Most High” – and yet say a virgin, at the same time? While we could get lost in a debate about the biological impossibilities of a virgin giving birth, we might miss a deeper point, here. Because, in a sense, this situation describes one of our basic dilemmas in life as human beings on earth: that we cannot, ourselves, remain forever in an untouched and untouchable state; nor is the luxury given to us, to live in a way that would leave no footprints on our mother earth.

But then, maybe that is not our part to play in this drama. Maybe it is not for us to be the shepherd, the wise man – nor the virgin, let alone “the beloved”. We are, it seems, mere beholders of a scene, as it develops from the moment of the first annunciation to his mother to the second angelic appearance in the fields nearby. And yet, we are not passive spectators, but very actively involved. 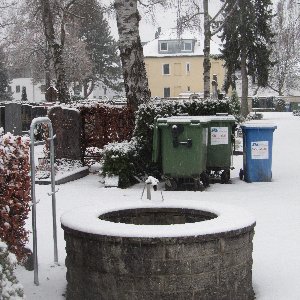 You and I, let us be honest, cannot save the world. And as Christians we know, that has been someone else’s role to play. Nor can we preserve, for ourselves or for others or for the earth we live in, a perpetual state of virginity, of being untouched and untouchable. But maybe, with Mary, we can come to a place where we say “Here am I, the servant of the Lord; let it be with me according to your word.”  And maybe, if we did that, all our attempts to reduce our footprint by living more sustainably would start making more sense; and all our frequent failures in doing just that would feel less devastating: because we know, what we have heard, what the angel said: The Lord is with you!