Liturgy of the Palms

SECTION ONE: NOTES ON THE READINGS 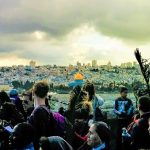 Psalm 118 forms the sixth and final hymn in the Great Hallel prayer, recited by Jewish worshippers at the three pilgrimage festivals (Passover, Weeks, and Tabernacles) where the Jewish faithful would travel up to Jerusalem to offer sacrifice at the time of the first and second temples. As it was recited at Passover, it is therefore likely that the ‘hymn’ sung by Jesus and the disciples following the Last Supper (Matthew 26:30) was this – Psalms 113-118.

It is also unsurprising then, that its words were on the minds and lips of those greeting Jesus as he rode into Jerusalem, as verses 25-26 of the Psalm are echoed in Matthew 21:9 – “Hosanna ([God] saves us)!” and “Blessed is the one who comes in the name of the Lord”. The Psalm is therefore a song of praise for the steadfast love of God (verses 1-2; 29) whose love compels a thankful response, and an approach to the dwelling place of God (verses 19-20), to offer sacrifice and praise (verses 27-28).

The Psalm also states the “stone that the builders rejected has become the chief cornerstone”, which Jesus references later in chapter 21, in response to how the parable of the tenants is received by the Pharisees.

The Psalm also proclaims “this is the day that the Lord has made; let us rejoice and be glad in it” – placing the image of the Creator God in the heart of this hymn of thanksgiving.

Jesus enters Jerusalem from the east, having traversed the Jordan Valley, and ascended the Judean mountains after leaving Jericho (chapter 20) and after restoring the sight of two blind men. Jesus has to pass the sites of his baptism, temptation, and the prefiguring miracle of Lazarus being brought back from the dead on this route, and then goes on to follow the route expressed in Psalm 118 – entering the city of Jerusalem through an eastern gate – again reflecting messianic traditions in Judaism.

In the passage, Matthew explicitly links Jesus’ entry on a donkey and a foal (perhaps representing the Jewish people and the Gentiles: one under the covenant and the other not yet?) to the words of the prophet Zechariah, confirming Jesus’ messianic status.

The passage is very much a fulfilment of prophecy, with Jesus confirmed as the messiah. However, by stopping the story here, we wait, in the ‘real time’ of Holy Week, for the impending rejection and betrayal of the Christ.

In some ways ‘Palm Sunday’ is an easy Sunday on which to reflect on God’s creation – there is the obvious connection with nature in its name. But there are other less obvious connections too – in the places and events within which this gospel passage sits.

The visual imagery of many of our churches in the Middle East on this day is of spaces covered by freshly cut palm branches. Often churches will use a donkey as a visual for the humility of Christ entering Jerusalem, not as a King, but as a servant. Today on Palm Sunday in Jerusalem, Christians from across the world slowly descend the Mount of Olives, waving palm leaves and stopping traffic and dancing into the Old City.

As Jesus walked up from the River Jordan to the city of Jerusalem, he moved from fertile valley, to desert to a compact walled city in the Judean hills. Today, that journey is a sad one, if you choose to look. The River Jordan is a trickle of a stream (away from the winter months), with 96% of its historic flow now diverted. The fertile lands around its banks display another oppression as the date palms whose leaves were signs of joy at the first Palm Sunday, now grow on Palestinian land expropriated and under occupation, and these  trees themselves use up so much of the water that used to flow in the River Jordan. As you reach Bethany, where Jesus raised Lazarus and took respite himself during Holy Week, you are confronted with a concrete wall 8 metres high, that bars your route on to Bethpage and then on to Jerusalem, a sign of human injustice, division and suffering.

Jesus, on arrival in Jerusalem, overturns the tables of the money changers, symbolic of how God’s people had (and continue) to reject God’s rule and corrupt it with human rule. From now until Easter Sunday, we continue to reflect and repent, aware of our participation in the rejection of God’s rule, our complicity in the death of the one who comes to save, and our failure to be good stewards of God’s creation. And yet, in this one moment on Palm Sunday, the people in Jerusalem recognise the presence of the messiah, and that “this is the day that the LORD has made; let us rejoice and be glad in it.” (Psalm 118: 24) In this brief moment we see the hope of a restored earth, with us praising our creator God and inviting him into our renewed Jerusalem. Let the vision of God’s imminent Kingdom inspire us to bring it in to our suffering world, to restore the earth.

EcoPeace are a cross-national environmental body of Jordanians, Palestinian and Israelis working to restore the Jordan Valley. The link is to their faith based resource for Christians, there are other resources for Islam and Judaism too.

Article on farming in the Jordan Valley – https://www.theguardian.com/global-development/2012/nov/07/palestine-date-farmers-occupation-indifference